Murph is more than just a workout, it is a tradition that helps push us, humble us, and dedicate a bit of pain and sweat to honor a man who gave everything he had. This year Murph is going to feel very different given the circumstances. But that doesn’t mean we shouldn’t hold ourselves accountable and complete any version of a very important hero WOD. Finding motivation, staying invested and finishing one of the hardest workouts we do without being able to do it in a large group at the gym will be very difficult, but remember Lieutenant Micheal Murphy made the ultimate sacrifice for this country and anyway we can honor that is something we should be proud of.

Putting ourselves in uncomfortable situations and overcoming the challenge forces us to reflect and feel gratitude for all we have and pride in what we have accomplished. Today is a day to do something bigger.

If you do not know Murph’s story, it goes a little something like this.

This Hero WOD was one of Mike’s favorites which he named “Body Armor”. But due to his incredible sacrifice, it is now referred to in the CrossFit community as “Murph”. We participate in remembering and honoring the great Navy Lieutenant Michael Murphy, 29, of Patchogue, N.Y., who was killed in Afghanistan June 28th, 2005.

LT. Michael P. Murphy was the officer-in-charge of a four-man SEAL element in support of Operation Red Wings, tasked with finding a key anti-coalition militia commander near Asadabad, Afghanistan. Shortly after inserting into the objective area, the SEALs were spotted by three goat herders who were initially detained and then released. It is believed the goat herders immediately reported the SEALs’ presence to Taliban fighters.

A fierce gun battle ensued on the steep face of the mountain between the SEALs and a much larger enemy force. Despite the intensity of the firefight and suffering grave gunshot wounds himself, Murphy is credited with risking his own life to save the lives of his teammates. Murphy, intent on making contact with headquarters, but realizing this would be impossible in the extreme terrain where they were fighting, unhesitatingly and with complete disregard for his own life moved into the open, where he could gain a better position to transmit a call to get help for his men.

Moving away from the protective mountain rocks, he knowingly exposed himself to increased enemy gunfire. This deliberate and heroic act deprived him of cover and made him a target for the enemy. While continuing to be fired upon, Murphy made contact with the SOF Quick Reaction Force at Bagram Air Base and requested assistance. He calmly provided his unit’s location and the size of the enemy force while requesting immediate support for his team. At one point, he was shot in the back causing him to drop the transmitter. Murphy picked it back up, completed the call, and continued firing at the enemy who was closing in. Severely wounded, LT. Murphy returned to his cover position with his men and continued the battle.

LT. Murphy fought on, allowing one member of his team (Marcus Luttrell) to escape before he was killed. For his selfless actions, LT. Michael Murphy was posthumously awarded the Congressional Medal of Honor on October 27, 2007. We honor his sacrifice and memory though a little sweat and a little pain on Memorial Day.

“Murph”
For time:
Run 1 mile
100 Pull Ups
200 Push Ups
300 Air Squats
Run 1 mile
*Partition reps of pull ups/push ups/squats as needed. Grab a partner and complete it as a team. Just show up and work hard.
If you feel like doing Murph in a small group. Reach out to a coach I will have a few people at my house working through it. 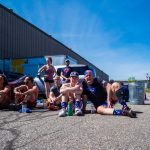 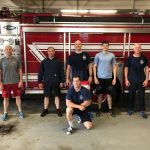